From a New York Times article by Harvey Araton:

On a scale of 1 to 10, Andy Pettitte’s level of certitude seemed to be a 5. Halfway convinced he couldn’t grind out another year with the Yankees in New York, he opted for an unforced retirement in Houston to watch his children play sports and begin to figure out what to do with the rest of his life.

Perhaps the use of 1-to-10 scales should be retired, as well, because of the common misconception that 5 is halfway between 1 and 10. If you don’t believe me, take a look:

This misconception is not restricted to sportswriters, as I reported in this article describing a review of thousands of interviews that the World Values Survey conducted around the world.

Among the data reported, respondents were asked whether they think that divorce can never be justified (1), always be justifiable (10), or something in between. Seventeen percent of the 61,070 respondents for which a response was available selected 5 on the scale, but only eight percent selected 6 on the scale. The figure below shows that 5 was more popular than 6 even in countries whose populations leaned toward the 10 end of the scale.

It seems, then, that 5 serves as the ‘‘psychological mid-point’’ (see Rose, Munro, & Mishler 2004) of the 1-to-10 scale, which means that some respondents signal their neutrality by selecting a value closer to left end of the scale. This is not good.

Peter Gleick has confessed to obtaining confidential Heartland Institute files under false pretenses, and some persons have also accused Gleick of forging the memo that was released with the files. But analyzing the memo as if it were written by one person might be a mistake, because there is evidence that the memo is the work of multiple authors.

Consider these inconsistencies in the less-than-two-page-long memo:

1. The memo varies ending a section heading with a period:

2. The memo varies the use of first names:

3. The memo varies the hyphenation of high-profile:

4. The memo varies the use of such as and e.g. when indicating examples:

5. The memo varies the rules for lists: funding is listed from largest amount to smallest amount, but there is no apparent order for listing Romm, Trenberth, and Hansen.

7. The memo varies in quality. For example, the memo starts with a well-written sentence that has an extended introductory clause and no em-dashes or parenthetical tangents; the second sentence nicely follows the first sentence:

Here is another well-written section:

But this next sentence is full of problems: the variation from e.g. to such as in a section of the sentence that tries to maintain a parallel; the use of his in his Forbes blog refers to Taylor inside a parenthetical remark so that the main sentence reads …especially through our in-house experts through his Forbes blog…; and parallelism is lost when through is not placed in front of our conferences as it was in the previous item in the list and the subsequent item in the list. Moreover, the casual use of parenthetical remarks is not present in much of the rest of the memo:

The memo also omits a necessary comma before the and that separates two independent clauses:

The inconsistencies listed above suggest that the memo was written by multiple persons or by a highly-inconsistent writer. But the memo displays amazing consistency amid apparent inconsistency in at least one instance.

My original analysis of the memo suggested that an existing Heartland memo might have been interpolated; entire sections might have been added or deleted, which would explain why two phrases saying pretty much the same thing appear in close proximity to each other:

That finally sentence ends the memo and is a poor conclusion, but that sentence would not be as poor had it been part of a concluding section that has been deleted.

In some cases, though, the memo has evidence that interpolations were made at the sentence level.

Consider the sentence outlined below in red about funding skeptic Anthony Watts to create a website to track temperature station data: ask yourself whether that sentence belongs where it currently appears in the memo, after a discussion of climate communications and “more neutral voices” in which no first names are provided, or whether that sentence might more naturally have been located at the end of the paragraph highlighted in blue, which mentions — by first name — funding for persons like Anthony Watts who publicly counter the alarmist message. 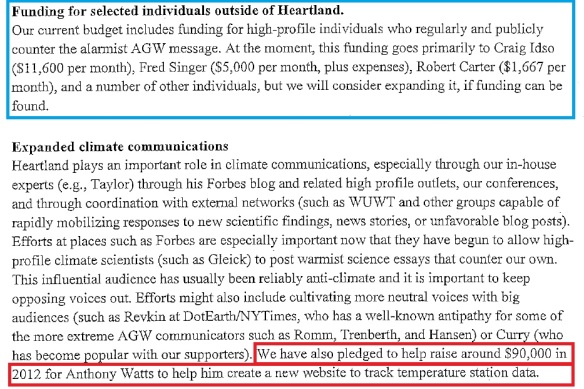 The theory of an interpolated memo suggests that an existing memo was augmented to make the memo more sinister: there is no need to presume that someone was creative enough to generate the idea of a fake memo to summarize pedestrian financial data in a more sinister tone.

But presuming that the memo was the work of one author presumes that a person with enough originality to conceive of producing a fake memo from scratch is also an extremely inconsistent writer who does not know the possessive form of United Nations.

Also incidentally, Peter Gleick, who obtained the Heartland files under a false identity, uses the Oxford comma, too: (h/t to Steve McIntyre for linking to the PGleick review)

The theory of multiple authorship does not necessitate two forgers or an interpolated memo. But the theory does suggest that treatment of the memo as a seamless garment might not be appropriate when analyzing the memo to identify its author.

Memo elements described in this post might have resulted from an inconsistent author working with Heartland documents. The author would, for instance, use first names for persons receiving funding because first names were used in the documents that the author had been copying; the author would then revert to his or her personal last-name-only style when extemporaneously writing the climate communications section without reference to any Heartland file.

Presuming one highly-inconsistent author working from Heartland files explains much of the observations described above; even variations in style and quality might be explained, if the author’s free-flowing style evident in the climate communications section was held in check when copying Heartland files for much of the rest of the memo.

It is still unclear why funding for Anthony Watts to track station data was mentioned in the climate communications section and not in the funding for individuals section, but that element alone does not demand postulating a second author.

Joe Bast has produced a version of the memo in which yellow highlight indicates forged phrases, which might be used to focus attention on the features of the memo that are reflective of the forger: